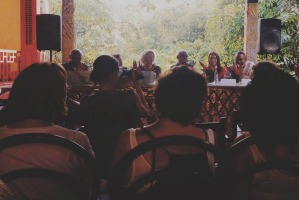 I’m in Ubud for the annual Ubud Writers and Readers Festival. It has only been a day since I arrived and it’s been fantastic. Even though I’m here alone, with no skills to ride or drive, getting around is easy. Today’s a relatively free day before the next four busy days attending session after session on just about everything – from writing and politics, to cooking, coffee and the arts.

The media meet just concluded and on board the panel were such authors as Amitav Ghosh and Elizabeth Pisani, festival founder Janet DeNeefe, and Azyumardi Azra, a prominent Muslim scholar, among others. They addressed the many reasons for their being there at the festival. Interestingly, the theme of UWRF 2014 is Saraswati, the goddess of wisdom and knowledge. DeNeefe aptly mentioned that she was happy that this arts festival coincided with Ubud’s ongoing festival dedicated to the goddess.

Amitav Ghosh shared his thoughts on his works saying, “In Asian history there has always been some sort of a profound silence; it’s a problem that we face because there’s so much that hasn’t been documented.”

“For instance, from 1938 onwards, many Indians and Chinese left for Fiji and Mauritius as labourers. They left behind no sources, but using objects like immigration papers, it has been possible to reconstruct this occurrence in history. I’m also greatly fascinated by the opium trade. Again, this trade that financed European colonial trade hasn’t been documented,” Ghosh concluded.

Elizabeth Pisani, who has travelled for innumerable months across Indonesia said that her approach to writing and covering Indonesia is the same as the way she approaches everything else in life – to have a coffee. She recounted several instances of extraordinary happenings over a simple cup of coffee, or kapi, as it is known here.

“I got on a boat with no plan, but I found different stories everywhere I went. Indonesians are without doubt the most generous and hospitable people I have met on my travels, and I have travelled extensively across the world,” she said.

This was an exciting start to the festival with plenty of busy days ahead. To be a part of the media and to be able to cover such a great festival has been something I’ve wanted to do for a while. It’s proof that dreams do come true.