A Play of Light 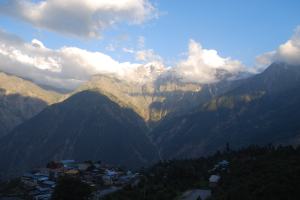 I  came across an interesting TEDTalk by Alexa Mead titled, Your Body is My Canvas, in which she shares her journey as an artist. When she was younger, Mead was fascinated by shadows, and often found herself painting over them. Much like creating a permanent shadow.

Over time, she began highlighting not just the shadows she saw but also the light that fell upon objects and beings. In essence, she was actually painting what she saw — on friends, objects and surfaces.  In the TEDTalk video,  Mead is first seen painting a backdrop. She then paints over her subject (a man) to match the textures of the background. When viewed from a distance, or as a photograph, the entire creation appears two dimensional. Simply put, Mead transforms a 3D object and its environment into a two-dimensional creation that looks much like a painting. It’s unlike anything I’ve seen before, and really got me thinking about my own fascination for light and shadows.

I was left inspired after watching this video. Mostly every TEDTalk leaves me this way. But this time around, it gave me a gentle nudge to step out of my comfort zone to write a blog post after what might seem like eons. And, this brings me back to my love for light, and mostly, the way it transmogrifies as the day turns into night.

A sunbeam piercing a dust-filled room. A shadow created by natural light. Silhouettes of objects, forms and structures. Most interesting is the fact that these figures, shapes, rainbow hues and symmetrical forms are created by a natural source, reminding you, ever so often, of the small, simple and organic pleasures of life.

I shot the photographs (above) just before sunset near Vadivali Lake in Kamshet, a little town that’s a couple of hours out of Mumbai. As soon

as the sun began to set, everything around us – trees, shrubs, flowers, cows and dogs – took on a silhouetted effect. When the sun was at its lowest, nestled between the silhouetted hills, the lake took on a purple-hued rippled effect. It’s really quiet in Kamshet, and if you’re looking to get away from the madness of the concrete jungle, this might just be the place.

When I think of light and shadows as strong elements, I can’t help but think of Rajasthan, particularly when I visited Jaipur a few years ago. Hawa Mahal in Jaipur (pictured above) is a photographer’s paradise. Light enters the erstwhile home of Maharana Sawai Pratap Singh through hundreds of tiny windows that also bring in generous gushes of wind. The windows allowed the women of the house to get glimpses of life outside their home.

It was on one of the terraces that I, yet again, spotted a sharp play of light and shadow. A perfectly symmetrical shadow intersects the adjoining wall makes it seem like I was in the right place at the right time.

View all posts by Beverly Pereira

What are your thoughts on this? Cancel reply